Since I accepted my first commission at the age of 15, I've been focusing on the “Landscape of the Soul”, the natural world, and how the soul interacts with the mystical qualities of the landscape. I'm a 'plein air' (outdoor on location) painter and get much of my inspiration from painting outdoors in nature, especially flowers and the beautiful rocky coast of California.  I'm especially passionate about traveling off-road and overland,  painting the often inaccessible and back country beauty of America and beyond.  Listening to the sounds of the wind, rustling leaves, surf, birds, and sometimes, just plain silence is something that translates directly into my work. Beyond that, there are almost always shapes and symbols that my subconscious decides to paint for me.  That's the really interesting part!  More recently, I have doing larger studio pieces using Old Master techniques that involve building up brilliant oil color using many thin layers of paint. These paintings literally glow with color. Extending my work to a larger audience is also a goal of mine. I recently started offering limited edition oil-enhanced metal prints under Cindy Fine Art Editions. Feel free to reach out about purchasing my work.

I'm a member of the California Art Club and Redondo Beach Art Group. I am also proud to be listed in the Guinness Book of World Records for my participation in the 2010 Pasadena Chalk Art Festival, the world's largest chalk painting event. My work has been exhibited throughout Southern California including Randy Higbee Gallery, Huse Skelly Art Gallery, and the Women's Club of Pasadena. Commissions  are happily accepted. 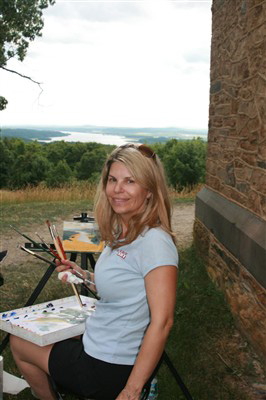 Purchasing Information:
I use Paypal as my payment processor on this web site with a convenient shopping cart. Should you wish to use alternate purchasing methods, contact me here.